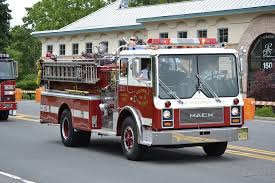 EAST GREENWICH–The East Greenwich Town Council on Monday approved of the disposal of the reserve fire truck, setting in motion the process of attaining a new truck for the fire department.  The twenty year old reserve truck, Fire Chief Christopher Olsen reported to the council, has taken a serious toll because of “wear and tear from years of use.”

“My recommendation is that we retire this truck, sell the truck, and actually take that money and put it into our new truck,” Olsen said.  “Then start a committee on purchasing a new fire truck in the near future.”

Olsen also pointed out that most fire trucks that are used in a community the size of East Greenwich are replaced within 12-15 years; the reserve truck, which has been in use since 1998, has far exceeded the average lifespan.

“It has served its purpose, and done a good job for this town,” he said.

The council, which has recently come into conflict with the fire department over budget concerns, appeared receptive to the department’s safety concerns.

“The fire truck is very, very old,” Council President Sue Cienki agreed. “Let’s get rid of this new truck, sell it, and get them a new truck.”

The reserve fire truck is one of three trucks currently in use by the department and only to be used if trucks 1 and 2 are unavailable. However, after a recent incident, the truck is no longer in a condition fit for use, even in reserve.

“As it was going down a road on incident, it had sustained some damages from potholes through the town’s ways,” Olsen explained.

According to Marion Body Works, a fire and emergency products company, a truck should be replaced when it’s condition becomes a threat to firefighters’ safety:

“Your community depends on your crew and fleet of vehicles to be ready for any fire emergency they respond to. If one or several components on your apparatus are making it difficult to complete these assigned missions – and thus putting lives at risk – then it’s time for an update. As we just mentioned, a repair might make sense if the cost is low enough and damage isn’t severe, but critical damage to your apparatus’ major components (e.g. engine, transmission, pump, etc.) is often very expensive and difficult to repair. If any of your rig’s major components are damaged beyond repair (or a repair still won’t make it 100% stable again), then you have to replace it altogether.”

However, before the council unanimously approved of the truck’s “retirement,” Councilman Nino Granatiero first questioned the town’s viability to afford a new fire truck.

“What would the potential value be in selling this, and what would be replacement value?” Granatiero asked Chief Olsen.