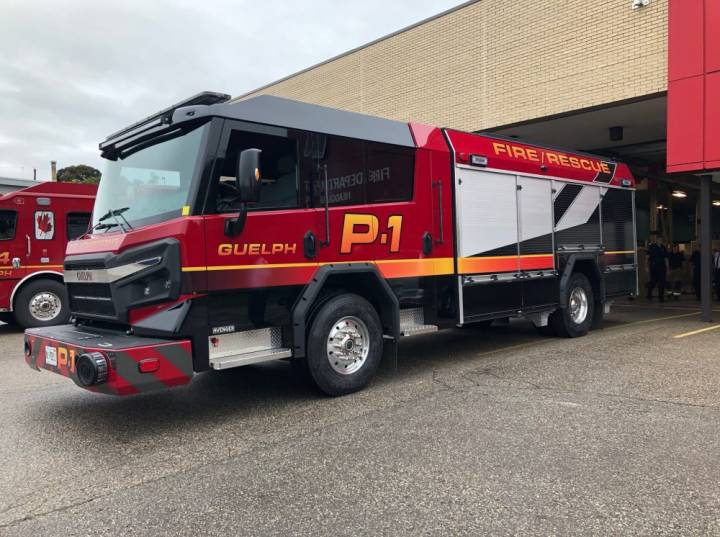 It looks like something from the Transformer film series and is even called the “Avenger” by the manufacturer, but it’s just the latest addition to the Guelph Fire Department’s fleet.

The brand new pumper was received about a month ago from Rosenbauer America in Minnesota and was put into service this week.

Chief John Osborne says the truck is already getting some looks.

“A lot of people are pulling over and taking pictures, and coming in and asking about it,” he said.

“It is a whole new design that Rosenbauer America has brought out.”

Even with the sleek look, the fire truck is shorter from front to back and comes with a tighter steering radius, Osborne added.

He said that was important for Guelph.

“It allows us to get into the areas within the community that are a little bit smaller because intensification is the way we’re moving towards now and we needed a truck that was capable of getting into the smaller areas,” Osborne explained.

The truck also comes with a 360-degree camera system, it has about 20-25 per cent more storage space and it can hold an extra 1,000 litres of water compared to other pumper trucks.

Older trucks carry can carry just under 1,900 litres of water, whereas the Avenger model can carry almost 3,000 litres.

“It does give us a lot more flexibility as far as how much of a fire we can put out and it also saves time because the crew doesn’t have to grab a hydrant,” he said.

The truck was purchased for $740,000, but Osborne said about $100,000 was saved because it was meant to be one of Rosenbauer’s demonstration trucks.

The purchase was covered through the city’s 2017 capital budget.

The fire department’s fleet currently consists of nine pumper trucks, one aerial truck and one tanker truck. The new truck is replacing a pumper that is reaching the end of its life cycle and will soon be put up for auction.

Osborne said their next purchase will most likely be made in 2020.