Types of Hinges
A hinge is a mechanical bearing that connects two solid objects, typically allowing only a limited angle of rotation between them. Two objects connected by an ideal hinge rotate relative to each 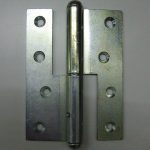 other about a fixed axis of rotation: all other translations or rotations being prevented, and thus a hinge has one degree of freedom. Hinges may be made of flexible material or of moving components. In biology, many joints function as hinges like the elbow joint.

There are many types of door hinges. The main types include:

Spring hinge
a spring-loaded hinge made to provide assistance in the closing or the opening of the hinge leaves. A spring is a component of a hinge, that applies force to secure a hinge closed or keep a hinge opened.
Barrel hinge
a sectional barrel secured by a pivot. A barrel is a component of a hinge, that has a hollow cylinder shaped section where the rotational bearing force is applied to the pivot, and may also have a screw shaped section for fastening and/or driving the pivot.
Pivot hinges
which pivot in openings in the floor and the top of the door frame. Also referred to as a double-acting floor hinge. This type is found in ancient dry stone buildings and rarely in old wooden buildings. These are also called haar-hung doors. They are a low cost alternative for use light weight doors.

Butt/Mortise hinges
usually in threes or fours, which are inset (mortised) into the door and frame. Most residential hinges found in the U.S. are made of steel, although mortise hinges for exterior doors are often made of brass or stainless steel to prevent corrosion.
Case hinges
Case hinges are similar to a butt hinge however usually more of a decorative nature most commonly used in suitcases, briefcases and the like.

Continuous hinges, or piano hinges
This type of hinge is also known as a piano hinge. It runs the entire length of the door, panel, or box. Continuous hinges are manufactured with or without holes. These hinges also come in various thicknesses, pin diameters, and knuckle lengths.

Concealed hinges
Used for furniture doors (with or without self-closing feature, and with or without damping systems). They are made of two parts: One part is the hinge cup and the arm, the other part is the mounting plate. Also called “cup hinge”, or “Euro hinge”, as they were developed in Europe and use metric installation standards. Most such concealed hinges offer the advantage of full in situ adjustability for standoff distance from the cabinet face as well as pitch and roll by means of two screws on each hinge.
Butterfly hinges, or Parliament (UK) Hinges
These were known as dovetail hinges from the 17th century onwards and can be found on old desks and cabinets from about 1670 until the 18th century. The form of these hinges varied slightly between manufacturers, and their size ranged from the very large for heavy doors to the tiniest decorative hinge for use on jewellery boxes. Many hinges of this type were exported to America to support the home trade’s limited supply. They are still found to be both fairly cheap and decorative, especially on small items.
Flag hinges
A flag hinge can be taken apart with a fixed pin on one leaf. Flag hinges can also swivel a full 360 degrees around the pin. Flag hinges are manufactured as a right hand and a left hand configuration.

Strap hinges
An early hinge and used on many kinds of interior and exterior doors and cabinets.
H hinges
Shaped like an H and used on flush-mounted doors. Small H hinges (3–4 in or 76–102 mm) tend to be used for cabinets hinges, while larger hinges (6–7 in or 150–180 mm) are for passage doors or closet doors.
HL hinges
Large HL hinges were common for passage doors, room doors and closet doors in the 17th, 18th and even 19th centuries. On taller doors H hinges were occasionally used in the middle along with the HL hinges.

Since at least medieval times there have been hinges to draw bridges for defensive purposes for fortified buildings. Hinges are used in contemporary architecture where building settlement can be expected over the life of the building. For example, the Dakin Building in Brisbane, California, was designed with its entrance ramp on a large hinge to allow settlement of the building built on piles over bay mud. This device was effective until October 2006, when it was replaced due to damage and excessive ramp slope.

Hinges appear in large structures such as elevated freeway and railroad viaducts. These are included to reduce or eliminate the transfer of bending stresses between structural components, typically in an effort to reduce sensitivity to earthquakes. The primary reason for using a hinge, rather than a simpler device such as a slide, is to prevent the separation of adjacent components. When no bending stresses are transmitted across the hinge it is called a zero moment hinge.

Pin
The rod that holds the leaves together, inside the knuckle.
Knuckle
The hollow—typically circular—portion creating the joint of the hinge through which the pin is set. The knuckles of either leaf typically alternate and interlock with the pin passing through all of them. (aka. loop, joint, node or curl)
Leaf
The portions (typically two) that extend laterally from the knuckle and typically revolve around the pin.

Hinge (film)
A short film by Aldo Emiliano Velasco (Echo) about the origin of the hinge.
Butler tray hinge
Fold to 90 degrees and also snap flat. They are for tables that have a tray top for serving.
Card table hinge
Mortised into edge of antique or reproduction card tables and allow the top to fold onto itself.
Drop-leaf table hinge
Mounted under the surface of a table with leaves that drop down. They are most commonly used with rule joints.
Piano hinge
a long hinge, originally used for piano lids, but now used in many other applications where a long hinge is needed.
Living hinge
a hinge consisting of material that flexes