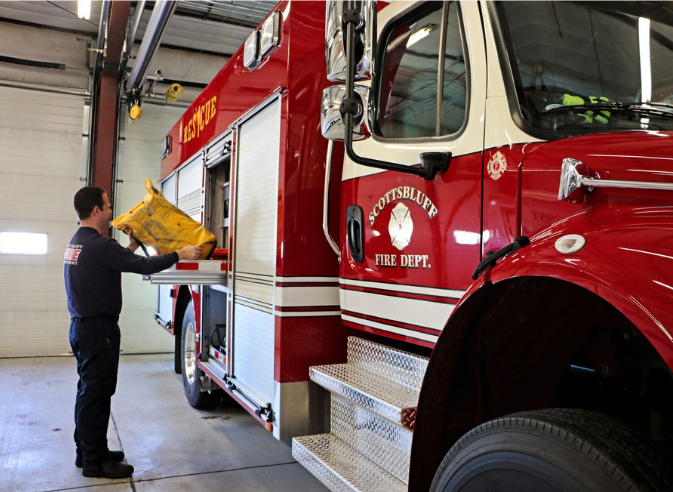 SCOTTSBLUFF — Scottsbluff firefighters are responding to emergencies in a new rescue unit.

Rescue 1, the department’s newest truck, was put into service for the first time Jan. 8.

Scottsbluff Capt. Justin Houstoun said the department took delivery of the custom truck in early December. SVI Trucks, a Fort Collins, Colorado, business, constructed the truck. Houstoun said the business started out by making high-powered fans for fire departments and then transitioned into other equipment and is now a one of the premier fire truck builders in the United States.

Custom making the truck allowed the department to have input into the process.

“The biggest things is that we were combining two trucks into one truck,” Houstoun said. “We were consolidating the two trucks and we wanted to make sure that we could carry everything we needed.”

The trucks placed out of service were purchased in 1989 and 1999, respectively. Houstoun said the two trucks were spending a lot of time in the shop, needing repairs, and maintenance costs were increasing.

“The easiest way to explain why we needed a new truck was that the (older) trucks were falling apart. They had exceeded their life and they had done their duty.”

With the help of a FEMA Assistance to Firefighters Grant, 95 percent of the $350,000 cost for the truck was covered. The City of Scottsbluff paid $14,235 for the truck, quite a deal when many passenger vehicles cost more than that.

Now, Rescue 1 will carry a full set of extrication equipment for motor vehicle accidents and all needed equipment for specialized responses including rope rescue, trench rescue, confined space and water rescue. The truck is also fully stocked with all emergency medical services equipment.

“It is nice to have the one truck carrying everything you might need, where we had it split amongst two trucks before,” Houston said.

The primary function of Rescue 1 will be to provide response to motor vehicle and medical calls, which are a majority of the calls that the Scottsbluff Fire Department responds two. The department has two other trucks, Engine One and Tower One. Those two trucks will be dispatched to respond to fires and which truck is used depends on the circumstances of each call.